Mr. Heath Hayes, CMS Principal, gave an outstanding speech about what academic excellence means and how important it is for their future. Following the speech each student was called to receive their award.

Thirty-eight 4 year academic award winners were presented with $100 scholarships thanks to the generosity of the Bobcat community and the sponsors who gave generously. Award winners were also included in drawings for other prizes which included gift cards to local restaurants.

Following the ceremony, students and their families were treated to desserts in the CHS cafeteria. 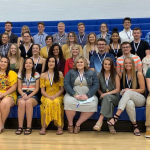 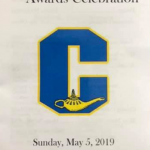