Lingafelter and Earle are playing at Districts for the second straight year. Stanberry is returning for his third straight year. Powell, the only senior, is making his first trip to Athens.

Two teams will earn a trip to Mason, Ohio to play in the OHSAA State tournament.

Coach Scott Ruby says, “We know the competition there and think we will be competitive in Athens. Seven players have earned a trip to the state tournament in recent history. I am hasppy with the play and results so far. We are going to try to give a good showing at Districts and I believe we have a chance to go to the State Tournament again.”

Next, Stanberry/Lingafelter and Earle/Powell will compete in the OHSAA Division 2 Southeast District at Ohio University in Athens on May 18. 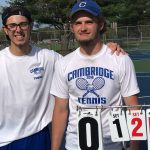 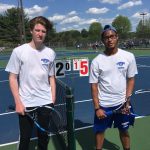